Skip to content
Latest news
Putting the Mickey into Fitbit – creating a watch face (with code)
Fully Jarvis L-Shaped Desk and Monitor Arms Build Project
List all your Google Classrooms Version 2.0
Batch Script that will list ALL your Google Classrooms in your G:Suite deployment
Return of the amazing Glo.li
Future of GlowInner GeekSocial Comment 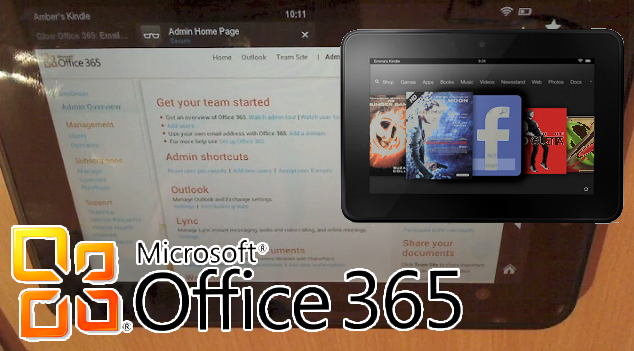 I thought I would have a go with an Amazon Kindle Fire HD and Office 365 Wave 14. I already know that the email, calendar and contacts is rock solid from previous tests with iOS and Android devices (of which the Kindle is one). I don’t want to repeat tests with the native apps – you can be assured that they work however if we really want learners to be creative with the new version of Glow based on Office 365 then its vital that the Office 365 Web Apps work well on mobile devices.  The vision for using mobile devices is an important part of the ICT Excellence Group report and the possibilities opened up by both BYOD and mobile device usage in schools is exciting.

I’m really happy that Office 365 email/calendar/contacts is good on iOS and Android devices but I wanted to be absolutely clear about the use of the WebApps. Rather than just write some text which could be argued against I decided to video my experience of using the Office 365 Wave 14 web apps with the Amazon Kindle Fire HD. If you have any problems playing the video then it is also on YouTube at http://youtu.be/6h5IEOJVv7M

To summarise the video none of the web apps are actually usable as applications on the Kindle Fire HD.

Word doesn’t let you enter text, doesn’t let you upload images from the device, you can’t edit tables you insert and you can’t select text to format it. Excel allows you to enter text and numbers.  You can enter formulae if you type them in.  You cannot select cells or cell ranges;  as either source data for formulae/charts or to allow formatting to be applied to an area. Powerpoint allows you to create slides which do have text on them but you cannot format the text or insert images from the device. You can create, edit the layout and add more slides.

OneNote app has the same text editing bug that Word has so you can’t enter any text at all.  You can’t insert images from the device – it tells you they are the wrong format when they are not. You can add Sections and Pages but you can’t add any text so it’s useless for learners, just like all the other Web Apps are for learners using mobile. Let’s hope that Microsoft are working on fixing these things.  The iOS iPad experience on Wave 15 is pretty good – will Microsoft update Wave 14 or Wave 15 to provide better support for Android?